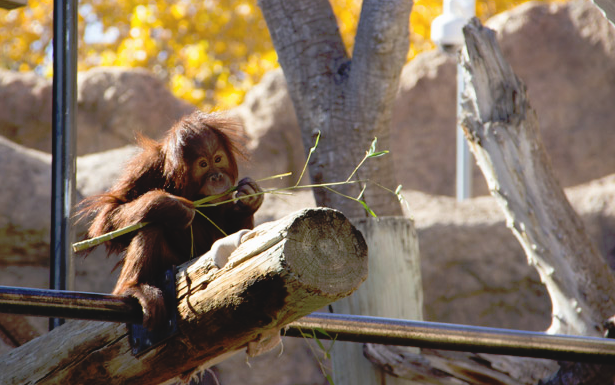 Pixel is a 3-year-old orangutan who lives at the ABQ BioPark Zoo. Like any 3-year-old, he’s pretty active. He jumps. He spins from his jungle gym. In short, he acts like a typical toddler.

Pixel is a Sumatran orangutan, of which there are fewer than 7,500 in the wild. The only other living species of orangutan, the Bornean orangutan, fares a bit better, but both species are critically endangered and will likely become extinct in the wild in the next decade.

Let me repeat that. Orangutans will probably become extinct in the wild in the next 10 years.

And they’re not alone – from 1970-2012, the Earth lost more than half of its animals, according to a recent report from the World Wildlife Federation. That number is expected to rise to about two-thirds of all animals by 2020 – that’s just slightly more than three years from now.

Meanwhile, Pixel and his family receive human-grade meals. Zookeepers interact with them to keep them enriched. They receive top-of-the-line veterinary care. Not so for wild orangutans, who fight just to stay alive.

In Indonesia, palm oil plantations are the number one threat to wild orangutans. According to the Orangutan Foundation, between 1,000 and 5,000 orangutans are killed each year in palm oil concessions.

Orangutan mothers are often killed by those clearing the way for palm oil plantations, and their babies become orphans. A number of care and rehabilitation centers attend to these young orphans, treating them for the physical, mental and emotional scars left behind.

Pixel will never have to worry about that. He’ll stay with his mother Sarah until he reaches 8 or 9 years old and would naturally leave his mother in the wild. Then he’ll probably head off to another zoo.

There is a lot we can do to reverse the next mass extinction and prevent the disappearance of wild orangutans, but will we do it? Can we say no to products with palm oil? Can we say no to continued oil exploration, which has accelerated global climate change? Can we truly put a stop to the illegal international pet trade? Only time will tell, but in the meantime it is critical that we keep animals like Pixel safe in zoos. Or we might just lose them forever.